This photo was taken on my wedding day while I was getting ready. Looking back at it, I feel that I can see the naivety and innocence in this picture before I realised the seriousness of the situation I was in. 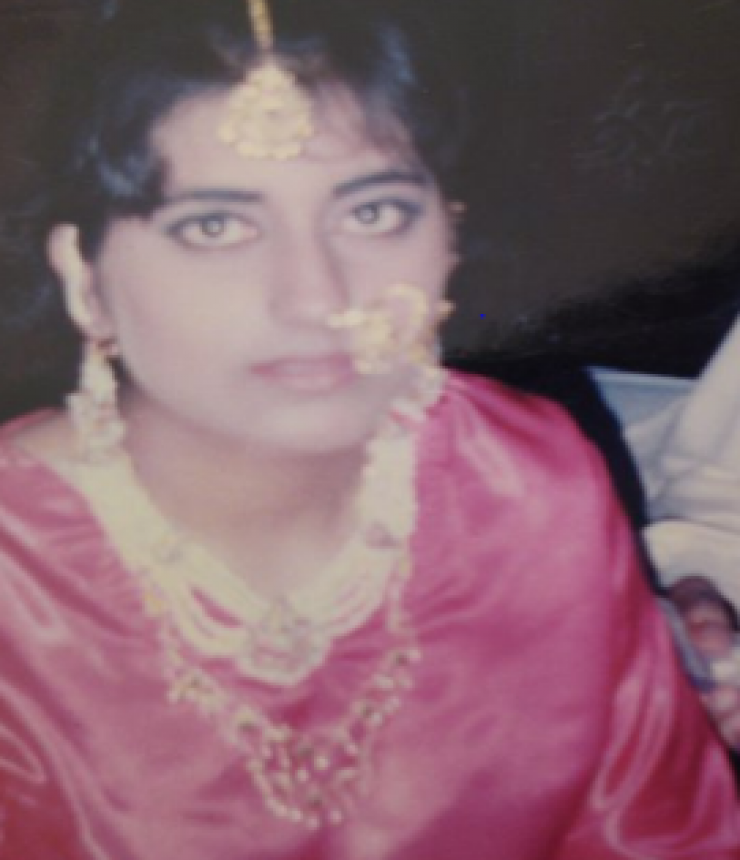 “I have spent my whole life living a double life and feeling like I have a split personality.”

The reality is that I have spent my whole life living a double life and feeling like I have a split personality, not being able to embrace fully all that Britain stands for and especially the freedom as a woman.

My dad was born in Pakistan and came over to the UK back in the late 70s when he married my mum who was raised in the UK. They both worked hard in providing for us. Growing up I felt that I had a fairly happy childhood. But I knew our lives were different to our friends at school because our lives were so restricted, such as not being allowed to hang out with friends.

This led us to building stronger bonds with our cousins. Every child needs boundaries and should be taught right from wrong but ours were extreme in comparison to others. If we ever wanted to do something that our parents did not approve of, we were always told that "Muslim girls were not allowed to do things like that." Our culture, religion, and traditions were often used as a justification for why we couldn’t have certain basic freedoms and choices. We understood how we could be married off and how we could only do certain things when we were married and living in our own homes...

The impact on my life in my teens was difficult as I suffered from depression. I wasn't diagnosed with having clinical depression until my mid-30s when I had a mental breakdown, but back then it was just confused with being a normal moody teenager. When I was 18 I left home as I wanted an independent life. I packed my bags and moved in with a friend without telling my family.

My family didn't handle this well and within a couple of days they had reported me missing to the police. In tracking me down, they then reported me for stealing gold, cash and even my car. I then received continuous emotional blackmail, death threats and was chased around the country by family members and “professionals” working for my family.

I lasted three months before the stress took its toll. Pressured to return home, I finally gave up. The first visitor was to be my uncle who walked up to me and placed his hands around my neck and squeezed tightly. "I'll happily do 20 years for doing you, for bringing shame to this family so don't ever pull a stunt like that again." My parents remained silent. I sank deeper into depression when my parents decided I needed a break and took me on holiday to Pakistan.

Immediately I was placed under pressure to get married to my father’s relative and told it would stop me doing stupid things like leaving home so as to be independent. I cannot describe the isolation and fear of feeling that I would never see England again unless I married, so I agreed. I was raped on my wedding night which was an indication of what torture was to follow over the next four years. I was left silent and fearful of what lengths my family would go if I escaped again.

When I refused to obey his wishes my "so-called" husband would call my parents to say he didn’t want to keep me anymore. This would lead to my family, my mum, giving me an ultimatum to either apologise to him and beg him to keep me or to get divorced and marry an older man as I am now damaged goods and no-one else will want me.

I started to cut my wrists in a desperate attempt to kill myself and self-harming became a way of life for me. On one occasion one of my close friends, Steve, called me. I had kept Steve a secret as it was wrong for a married woman to have male friends. Steve offered to help, and I managed to plan to leave my husband with his support. I was tracked down within a week and followed in my car by my uncles and ex-husband. They tried to run my car off the road which was deeply frightening, being chased.

I reported it to the police as I wished to prosecute, and it was being dealt with as an attempted murder. However, during their investigations my family managed to convince the police that the white guy I was with had kidnapped me. They told the police how I was happily married, and they were just trying to save me. The police believed them not me. No-one could help unless my family made an attempt to harm me. Eventually this led me to a career in policing to help others and change things. It has taken me years to settle down and it is still a journey, but I am doing my best to make up for lost time!

I have been involved with Karma Nirvana for more than two years now and it gives me a greater purpose. It helps to meet others like me and be part of a community that understands me. I am one of the lucky ones as I am still here and I use my voice to speak out for others and those who have been taken from us.

I'm a survivor and I won't be silenced anymore and with Karma Nirvana I am being given the platforms to speak out and embrace my independence, which is not a crime. I can’t even begin to describe the positive impact this has had on me. My experiences do not define who I am, but they are a part of my story and I finally feel like people understand me.

This is because they can understand what I have lived through, having lived through similar experiences themselves.

Being involved with the Survivor Ambassador Programme makes me feel like I have a family and I belong somewhere.